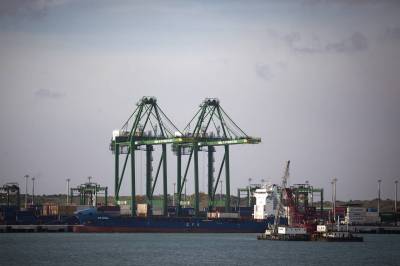 Members of the logistics delegation, organized by the Transportation Intermediaries Association, or TIA, said agreements such as a multimillion-dollar deal under way for Starwood Hotels and Resorts Worldwide Inc. to manage hotels in Havana will start a flow of goods across the Straits of Florida for the hospitality business.

American companies also are looking to export commodities, frozen foods and consumer goods to Cuba, said Robert Kemp, chief executive of Pennsylvania-based DRT Transportation LLC. “You’re talking about building a society for 12 million people that hasn’t been touched for 40 years,” he said. From construction materials to the consumer market, the possibilities are “endless,” Mr. Kemp said.

Mr. Kemp said it was clear from visits to cargo sites that Cuba needs big improvement in its transportation infrastructure. Local operators told the group that the easiest way to move freight 700 miles from one end of the island to the other is by sea, not truck or rail, he said. “The fact that it’s easier to put it on a boat tells all about the infrastructure that you need to know,” he said.

There are bureaucratic hurdles as well. Logistics companies must strike partnerships with local operators which are state-run, though a free-trade zone at the port allows investors to operate warehousing with 100% ownership, executives said.
Meanwhile, officials told the group they are keen on “preventing their cultural identity from being compromised,” said Ms. Spero, of Carrier Services. “They don’t want to see Starbucks in the barrios of Havana.”

Still, the group found the Mariel port to have modern facilities, including the ability to handle refrigerated shipments and weigh truck entering or leaving the container terminal.

The port, which is under development by Singapore-based terminal operator PSA International, has attracted additional investment from container ship operator CMA CGM SA, which said last year it would build a logistics hub including warehousing.

Write to Loretta Chao at This email address is being protected from spambots. You need JavaScript enabled to view it. - Link to Article on WSJ

When you subscribe to the blog, we will send you an e-mail when there are new updates on the site so you wouldn't miss them.

Sue Spero, President of CSI, has over 30 years experience in the full truckload sector of the transportation industry. Sue owned a trip lease firm prior to motor carriage deregulation, and went on to the position of Director of Operations of a truckload carrier. As a professor of Business and Logistics at Cumberland University, Sue received the Robert H. Beard Professional Award in 2001 for promoting higher educational standards in the field of transportation. A Certified Transportation Broker through the TIA, Sue is involved with the DNA, WBENC, Volunteer Chapter 135, the Nashville Traffic Club, and the World Trade Council, and is presently an adjunct professor of Business at Belmont University in Nashville.

CSI provides ongoing tracking of shipments and email confirmation of all pickups and deliveries. We believe that clear communication between customers, drivers and dispatchers is essential.